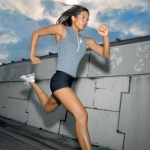 Most mornings I like to get up early and go for a run. I love the quiet of that time of day, when all three children are snuggled in their beds and the sound of my husband’s slight snore lets me know that I have a few moments of solace before the mayhem of the day begins.

The morning chill greets me as I open the door to the day, a quick thought of, “do I really want to do this when I could be warm in bed?” crosses my mind. Quickly, I shake off the thought and head out to the road. Now I could tell you I am entranced by the bird’s morning song or the grey glow that surrounds me, announcing the sunrise. But no, I have one focus. To get running and get home to a steaming hot cup of coffee.

It’s the first few strides that are the hardest, then I get in my groove and get a rhythm. My initial disdain for this task turns to enjoyment as my feet pound the pavement.

I am one of those runners that makes you laugh. I don’t look like the women in the Nike commercials, long strides, glowing completion, beads of sweat falling perfectly around their temples. My face starts to look like the color of a ripe tomato, my mouth is open and I look down at the ground for the better part of my run. Not a pretty sight, I know.

That morning was no different from the others, head down, focused on getting one of my “to do’s” checked off but I began to notice something. As I ran along the side of the road, my feet always landed on the white line. I kept on with my pace and saw that I continued to do this up and down hills and even when the ground went flat. When I strayed from this path I felt uncomfortable and went back to what I knew.

And there it was, that morning I realized that my entire life has been spent playing it safe, walking the line. Taking chances makes my stomach turn. I’ve done pretty well living safely and under the radar not calling too much attention to myself. Rock climbing and spelunking were things that I had to do because of school trips, not by any choice of my own. I couldn’t understand why people did these things for fun.

Becoming a mother also led me to believe that I had to be conservative and cautious and that my focus had to be on my children, so I shelved my dreams and took on the diapers. But now my children are older and wanting to take chances of their own. At 9, 7 and 4 they are daring and fearless, something that I have never been and I find myself hoping that some of that rubs off on me.

My feet have always been on that line, doing what I think I am supposed to do instead of what I feel called to do. But I have started to notice that I am being drawn to the other side of that line, the side that isn’t so safe and predictable; where you could end up slipping and falling in the ditch because the road isn’t so even and stable. I have found that this makes my heart pound harder and my head swim and my knees shake a bit but I have also found that I love that feeling.

Not following that line has afforded me some incredible opportunities one of which was taking a trapeze lesson on a team building trip for work. I don’t do heights. The second floor of a mall, coming down an escalator, glass elevators all make me want to throw up. But I had to do this…I mean it was for work, I don’t think I would have been fired for not jumping off a platform and flying 20 feet above ground but I couldn’t risk it.

So I suited up in my harness and climbed the 5 flights of stairs (which seemed like five hundred) to the platform where a boy, yes he was tens of years younger, was going to hold onto my harness and keep me safe. Now I have given birth three times, that is scary in and of itself but there were “things” in place to keep me calm. Yes drugs. I said it. I am not a warrior mom who pops that baby out and is booming around in fancy p.j.’s an hour later. Not me. I do not like pain or heights. There now you know two of my weaknesses.

I shared my fear with him (like so many before me had) and he just smiled and said “When I say ready it’s not a question.” What the hell does that mean? I found out quickly it meant “when I say ready you are going to go even if I have to kick your feet out from under you.” And so he did. And I soared and almost soiled myself. But I did it and with a little trick to boot. And I went back up the five hundred, I mean five flights of steps and did it again. I shook like a leaf every time and I was sweaty and looked awkward and so not pretty.

That day I stepped off the line. I still try to step off that line every now and again because sometimes the risk of falling in a ditch is one I am willing to take.

2 thoughts on “Walk the Line”